Just a Quick note. But with links that lead you places. TuxSax, left a comment, so I jump on over to his blog for a quick look, and maybe become a follower of his blog. - I can't read most of his posts. He's got some Right Handed font thing going on, (Google Translate says it's Hebrew, so I'll have to put that to work and go back to his site, as I he's got some other cool posts too)  but there are posts that I could read.  This next link comes from there. I think that it's really cool what this lady is doing, and if you like Art, or would like an origional painting, Ali wold be a great, great source.  So... I'm going to send you to his blog post, and you'll have to jump from there, to the free paintings post...

Posted, just in case anyone was wondering, and because, Linus Torvalds was
Shortlisted for 2012 Millennium Technology Prize.

This was cut and pasted from http://www.cs.cmu.edu/~awb/linux.history.html I added some color to it to help with the ease of reading.

About a week ago, I decided that I wanted to try out Ubuntu 12.04, since I was disappointed with my first experience with Unity, I wanted to give it another try.

My first mistake was to put it on a USB flash drive. I thought that perhaps that because I set it up to use the ext 3 file format that it caused it to be sluggish. So, after a day of on and off fiddling with it, I re-installed it onto the flash drive with ext 4. Still not very joyful. Screens would "freeze up" for a few minutes But it looked nice. So, Once again, I installed it on an external USB Hard Drive, after I created a partition on the HD for it. (I really need to make a partition on my hard drive for testing distros, but that's another tangent that I need to stay off of). 2-3 days later I finally get it installed where I could use it.

It's nice and it's usable.  Canonical stated that they wanted  to get away from X and move towards Wayland.  This movement might lead to other new and great things for the Linux world.  I also realize that Canonical wants move onto other platforms for their OS, to make Ubuntu useful on touch screens, and other interfaces, such as TV's. They've got great plans. I applaud them for that.  I support them trying new things.  I think that their vision is working. Canonical says that they're about 2/3 of the way done.  When and or If I ever get a tablet, I'd like to try Unity on it. 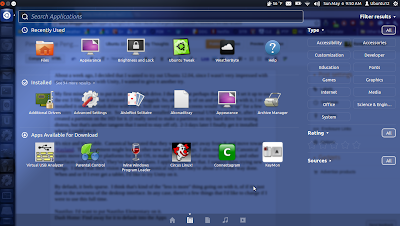 Some of the changes are kinda snazzy.
All in all I think that they've done a good job with a lot of the design, and usability of Unity.