[Edited and Updated to Reflect Changes in the main .iso file] 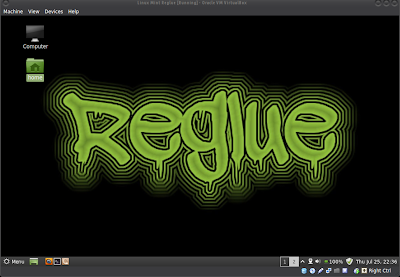 I'm honored to be able to freely contribute to the Reglue project.
(Humble bow)
For What it's worth, the official OS of Reglue is SolusOS.

I've done up a re-spun Linux Mint 13 Cinnamon LTS DVD .iso file for the Reglue project. What this rather large .iso file has in it is a few extra educational packages vs the Stock Mint LTS DVD.  Oh, and I did take the liberty of putting a different desktop background on it that I fiddled into existence with the help of the GIMP.

If you want something smaller for that old PC that doesn't do USB Boots or only has a CD Rom, I also created a smaller CD sized .iso of Mint 13 that you can get here. I Know I Removed:

LibreOffice-core, Tomboy Notes, Mono-Common, Java-Common, Braseo, Thunderbird, Banshee, and the GIMP. (On an offhand note, if you're looking for a 'buntu distro that fits on CD, you might want to take a look at Peppermint.) I highly suggest that you re-install the Java-Common packages, after install, even if you're not a LibreOffice user.

On Both of my re-spin Disks the user name is mint with a blank password.

You'll get the Gnome Classic Desktop by default. And, you'll have to use the terminal to exit the the Gnome Fallback mode, as it doesn't have a log off button ANYWHERE by default. Why that is, is beyond me, but it seem to be a horrible oversight. Horrible.
But you can exit the session with the command line [ gnome-session-quit ] to get to the login screen. 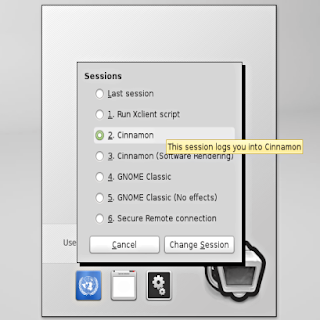 You can choose a different desktop session from the log on screen, so if you don't get Cinnamon by default, try logging on with Cinnamon enabled. After all that was the point of this adventure, was for me to respin Mint 13 LTS with more packages installed by default, so that Ken / Reglue.org wouldn't have to install them on their project.

If you plan on installing the larger disk .iso in a VM keep in mind that you'll have to adjust the default disk size from 8 gig to at least 9.

Some of the packages installed are

And a few more, I didn't keep track of all of them. :/   One note of caution, due to having enabled the backports is that upgrading might seem a bit convoluted, once installed, run mintupdate, twice. If you make the mistake that I did, I logged back on with the Gnome Classic desktop and found myself with nothing more than the Computer Icon, and Home folder Icon. Luckily the right click on the desktop brought up the terminal in Nemo, so I could log off. Then log in with the Cinnamon Desktop. You might also want to make sure that you've upgraded the

I did find that many of the file associations were not quite right either. Not sure if there was a way to fix that readily from Mintconstuctor, but it would be a good thing to fix. The Good and Bad of the new desktop is that I found that my Wallpapers weren't there by default any longer. They're easy enough to add, but it's still a sniggly pain. There are more wallpapers in the \root\reglue folder. A Ctrl-Right Click will allow you to add them at one time. Not sure if updating or DL the Theme's packages again would fix that issue for the default wallpapers. I think it might. One of the new features in the wallpaper options is to be able to chose a gradient background of two colors. I included two transparent backgrounds in the \reglue-extra folder along with some others so one could take advantage of that.  I can only get the desktop to resize properly in Gnome Classic mode, so here's a screenshot of that. 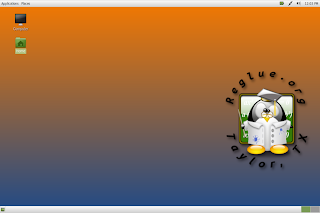 You can grab the larger Reglue LTS CinaNemo.iso here.

The Untouted Tech of Vcards and QR Codes


I've got a question for you. Well, actually, I might have more than one.


vCards are a great little text files of contact information, if you want to really get into the study of them you might want to check out the wiki page about them.

QR codes can hold vCard info in an image, and with the proper bar-code scanner on your phone you can import the above image with the same info as the vCard. Very handy.  In fact, while writing this, I scanned the above info into my phone from the QR Code above.  It showed up on my phone as:

But I'm digressing into QR Code info, vs the old vCard text file.

OK, back to the vCard stuff, and why they're important and how they're different and better is some ways than a QR Code. vCards are still used in the old feature phones, and they're easy to text to someone. They're also easy to export (backup) them to an SD card or on your computer.  This can also be very useful if you've got a friend or family member that DIDN'T back up their info, and lost all of their contacts. Maybe even yourself. You can text or email them selected .vcf files from your computer and they'll be able to easily import those shared contacts (other family members perhaps?) into their phone. Keep in mind that if they have a lowly feature phone that texting them the info might be easiest way to share contacts vs email. Speaking of email one can also import vcard contacts into Gmail.

If you were to open up a vCard in your text editor you'll see that it looks something like this. 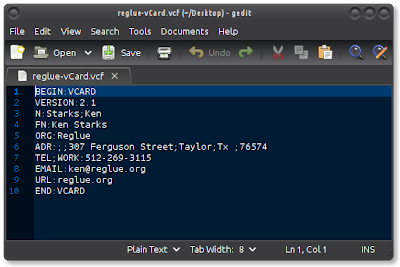 There's not a lot to them. It's worth the extra time and effort to get to know your phone so you can share them.  Granted a QR code and Barcode scanner might be the easiest way to import contacts, but when was the last time you had a folder full of QR Codes to scan or share?  Yea, me neither.

There's plenty of sites to create QR codes, etc.  I used Moongate to create the above code. Are there better sites? Why?

So again, I will ask, when was the last time that you used a vCard or scanned a random QR Code? 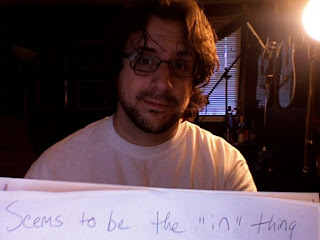 One of my favorite people that I've met online has been Phil Rossi  (G+). I recall trying to listen to an a live streaming interview with him. I don't even know who was doing the interview, but this was pre-smartphone days, and I was trying to catch the stream while trucking through the bowels of Mississippi on my laptop and Sprint CDMA dongle.  I was able to catch most of it.  At the time, I think that Phil was celebrating the end of his book Crescent. (Amazon, and Podiobook) versions.

I'm not sure how  or when Phil and I connected, but Twitter comes to mind, but needless to say we conversed. Out of those conversations he also wrote a chapter in his Notes From the Vault Episode 15 (Audio) about a truck driver that get's stranded.  Phil asked me for some input to help him out on it, and I did.  He gave me a little nod with that, and I'm forever flattered.

Well, now, it's time for me to give a little nod to him, and his band, Ditched by Kate.  I'm not sure how Phil is able to have any kind of sanity, being a talented as he is, and his mind must be racing with ideas and talent, as he's also a very, VERY accomplished musician. 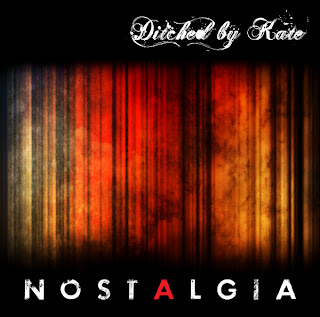 I for one, will be looking forward his bands release on April 4th.  It'll be available in all of the normal places.  I'll grab my via Google Play, but that's because I'm more of a Googler then anything else.  Please visit their site(s), and listen to and DL some of their soulful music.  They've got some weirdly cool tunes, and some good boogie woogie butt bumping tunes. Each track that I was able to listen to on their site sounded fresh, and well done.