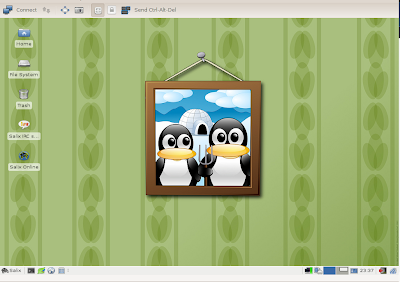 One of my G+ buddies recently mentioned Salix OS, a Slackware Based Distro the other day, as he was putting it on some old hardware.  This was just about a week before a hard drive died on an old 256 MB P4 Laptop, that serves as a digital picture frame, and sometimes doubles as a remote "stereo" unit in our living room.

This laptop had been running Xubuntu on it, as I had wanted a light distro for this older hardware, but even that seemed a little heavy.  Another one of the challenges this machine poses, is that it doesn't have DVD drive, just CD-ROM, nor does it support booting off of a USB. It has only one 1.0 USB port on it.  So after searching Distrowatch for another distro, I decided on Salix. After all, someone else I knew spoke well of it.  I knew that I was going to get outside of my "comfort zone" with something that wasn't  Ubuntu / Debian based.  I figured I was up for the challenge. As it turned out, it wasn't that hard.

Aside from the need for the Broadcom drivers, for the WiFi to work, the install went smooth.  I did the "full" install, and also let it wipe out anything that might be on the drive. Had I not had a network connection via wire, it wouldn't have gone so smooth.

Next came the snigglies and snags for me.  Not having been baptized into Linux via Slackware, etc, and the floppy disk installs of the 90's, some of the struggles some of you long term Linux fans have triumphed over, I had to do some digging and learning to get the the rest of the system setup as I wanted.

I wanted to be able to view this machine via Remote Desktop Viewer on my Linux Mint machine.  After some trial and error, and some more errors, and trials. I got it setup.  I got x11vnc going on it, for it's VNC server. Once I got that installed via GSlapt, and added the proper line for it to autostart I'm now able to access the machine while it sits on the shelf where it normally sits.  For what it's worth, (note to self)  the line that one needs in the Applications Autostart is this:

If you don't use the "-repeat -forever"  it'll boot, and start the x11vnc server, but once you exit your first vnc session, it will not start up again. It took me a little while to get those two additional switches figured out.

Next, was to try and get Rhythmbox on it, as it was listed in Sourcery Slackbuild Manager.  But it failed due to dependency's not being met.  I intend to get back to figure out how to build from source, or at least get it on the system in the future.  The reason for wanting Rhythmbox on the system, is so far, Rhythmbox is about the best thing out there that works with DAAP music shares, or at least with the one on my NAS drive.  But since that failed to install out of the box, I went ahead and copied the music from the NAS drive to the unit. That backs up the music, something I had considered anyway.  Also Rhythmbox handles the Shoutcast Streams if one wishes to add a few to it. I usually do.  But, that didn't work out.  So had to stick with the default media player of Exaile.  Even though I don't need Rhythmbox on it now, it's a puzzle that I want to figure out.

Exaile looked like it would work right, right out of the box, as it says it supports DAAP shares. But it didn't find mine.  It did work with a manual entry, so it's good to go. Also the Radio Streams didn't work. Audacious and VLC both can do those, so it's good.

So, overall, I'd say that Salix 14.0 with XFCE is a winner.  Much snappier than it's Debian/Ubuntu based Xfce counterparts.  While I didn't get it EXACTLY the way that I wanted, or had expected, it turned out well for my purpose.

As a standalone OS, for most people, I think that Salix would work well, it has LibreOffice, and handles network drives well. If you want to see a full rundown of it, check this posting out.