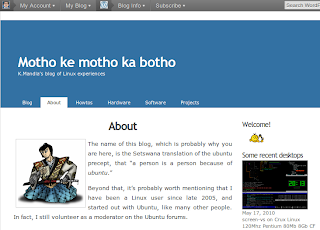 I was checking out the above blog (Motho ke motho ka botho) this past weekend, and I find it to be a cool blog, much like my own, the owner writes about his experiences with Linux and his Computer. A Chronology of stuff that he's done and put on the blog so he can go back to and review it later. Being able to backtrack to what you do, is part of doing good documentation.  It's not something that I've done a good job at,  after all, it's just my computer, right?

True, it is just my computer, but also part of the geek element to Linux and other open source projects is to put down (via a blog, forum, or?)  how you did what you did not just for you, but because someone else might have the same problem and they might find your solution helpful.  You never know what you might blog about that will help some other person trying not to pull all their hair out.
Currently in the Linux Desktop world, the distribution of Ubuntu is the most popular.  Even if I don't run or use a modified version of Ubuntu, it NEEDS to be there, and it NEEDS our support. Even if I don't agree with all of the modifications and changes that happen to it, I still need to be supportive of it.  Canonical, the company behind Ubuntu needs user support, and I don't mean just money, but support with their mission. I know I've not been the best example of this, and I'll make a conscious effort to be more supportive of the Ubuntu Team.
Here's one definition of Ubuntu:
Ubuntu: "I am what I am because of who we all are." A translation offered by Liberian peace activist Leymah Gbowee. Similar to a saying: A single straw of a broom can be broken easily, but the straws together are not easily broken."
Open Source, and Linux need to be able to get along in a world where there are monetary Goliaths pounding away at the public with commercials.  Linux is not created by one person, one company or just one idea.  It's a compilation of many ideas, many desktops, and many ways to get the job done.
I have to applaud anyone who hangs out in the Ubuntu forums and helps out. - I know they were there when I needed some help.  How about you? I guess now that I've been a Linux user for over 3 years,  and have had a few experiences I could help out a bit more.   The Ubuntu Forums are the most active, and probably where one could do the most good.  Linux Mint, also.  I'm currently using Linux Mint LTS, and plan on keeping it that way, as I don't like to change every 6 months.  I personally prefer to find my buttons and labels and widgets in the same place more or less.  But it doesn't mean that you or I couldn't help out.
But back to the previously mentioned blog, and game.  It's just really cool that there's someone out there doing something like this, creating some well written blog posts that others can find and use for their personal enjoyment.  And he's helping his community out by giving away machines with Linux on them.
And for that, I'd like give a shout out, and...
Pimp His Penguin....
at January 17, 2011